In my previous post I mentioned the new Zune 3.0 visualizations. I really liked them, so I decided to try and create them using WPF’s new (3.5 SP1) Effects.

A while ago I wrote about BitmapEffects, and why you should try to avoid them. Effects replace BitmapEffect with an elegant, hardware-accelerated API. An Effect is comprised of a class that derives from ShaderEffect and another file written in HLSL (High Level Shader Language), which is a C derivative. What you’re basically writing is a function that receives the coordinates of a pixel and returns a color – a pixel shader. If you want to learn how to write one, I suggest checking out Greg Schechter’s series. You should also have a look at the WPF Effects Library, which has a host of ready to use effects, and also shows a great way of using effects to create transitions.

Now, for my Zune mimic. I created two effects: Blend (which blends one element with another) and PointLight (which colorizes an element and adds two light orbs). I also added a few animations to the demo app, which made it look more like Zune. The result is quite pleasant. 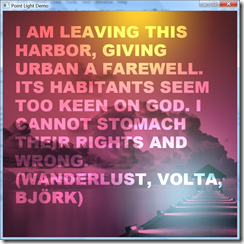 Although I’m quite satisfied with the API, there are a few things that aren’t so good:

To compile the attached project, you will need the Shader Build Task and Templates, available at codeplex.com/wpf (WPF Futures release).